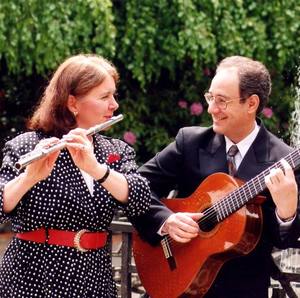 Duo Orpheus is composed of Elizabeth McBurney (flute) and Tony Chotem (guitar). The duo has been active in the greater Vancouver area since 1999.

Elizabeth studied flute at the University of Toronto, where she earned her Bachelor and Masters of Music. She has been a member of the Calgary Philharmonic Orchestra and the Orquesta Sinfonica de Maracaibo in Venezuela. Once back in Canada, she performed with the VSO, the CBC Orchestra and the Vancouver Opera Orchestra, and has toured with the Royal Winnipeg Ballet.

Tony studied classical guitar with Stephen Fentok in Montreal, and jazz with Armas Maiste in the McGill University Jazz Studies Program. Since relocating to Vancouver in 1989, Tony has taught at Capilano University and at the North Shore Music Academy. He performs regularly as a soloist as well as with his flute and guitar ensemble Duo Orpheus, and with his jazz guitar duo Double Helix. Performances cover the gamut from nightclubs and restaurants to recitals, concerts and festivals. As a Vancouverite, he has added composer, arranger and producer to his resume. He has produced several CDs while in Vancouver including his original jazz CD, Phoenix Rising, and his Christmas CD, Moon of Winter.

Together, Elizabeth and Tony create a lush but refined musical palate embracing the classical repertoire as well as beautifully arranged popular and traditional selections. Their engaging style is ideally suited to concert settings, weddings and corporate functions alike.